The videographic works of Marie José Burki (1961) investigate how the visible is cartographed, classified, formatted and categorized. Above all they revolve around the question of the ways in which the world is revealed to us beyond patterns of appropriation and incorporation. This exhibition shows her two recent video works, Horizons of a World I (2001) and Horizons of a World II (2001), and a silk screen (2003).

The images and sounds from which Burki weaves her stories are not per se strange and unfamiliar; rather they are taken from observation and experience. Horizons of a World I and Horizons of a World II each show a particular world, but without defining it more closely. One shows views of the landscape around Geneva shot from a great distance, the other newspapers from countries all across the world. These visual worlds differ greatly in terms of their content, but there are three good reasons why they bear the same title. Firstly, both videos are characterized by a roaming camera perspective that does not so much disclose the visible as touch upon it. Secondly, the long landscape shot and the close-up on the newspaper pages appear inversely to follow one and the same scale or principle, because it appears that the narrower the perspective, the more fragmented and discontinuous the unveiled reality; and the broader the view, the more undifferentiated and homogenous the visible becomes. The third aspect they have in common is of a conceptual nature. In the two works it is not just the camera work that is similar, but also the way in which a pattern of organization behind the visible is made perceptible by the roaming perspective. In the one case this is the carto-geographic pattern, in the other the medial-journalistic.

Interestingly, the organizing patterns only gradually become perceptible. With hindsight that makes sense, because they can only be mapped on a temporal axis, or put more simply, during the time of reflection - they are largely conceptual variables and not primarily visual ones. It is not the case that our gaze, as guided by the camera, takes in nothing, but rather it stops nowhere, prioritizes no detail, reifies no one visual sector, etc. Formulated positively, the gaze defines itself as a passage, as a wandering, as a rhythm, even if this rhythm cannot be defined musically in the strict sense.

There is a further question too, namely how the medial relationship between image and text - between looking and reading - is managed in non-artistic fields. Burki writes: "What interests me is how in general all images become the ’’same’’ - a Gucci advert, a picture of the attack on the World Trade Center. And above all, the obscenity of counterposing images and texts." One could say that Burki attempts to decentralize and reinterpret this relationship using an economy of roaming, of deambulating. In the media we find what can be seen as a reciprocal relationship of the assimilation of image and text, reflecting the media operatives’’ interest in exploiting the field of semantics, subjugating it to the ideological interests of the ’’broadcaster’’ or generally manipulating the world according to particular symbolic parameters that are, by nature, economically motivated. When Burki employs the trope of the roaming camera, she interrupts primary, conventionalized causal syntagmata in the image (the landscape as an additive agglomeration of houses plus transport routes plus woodland etc.; the newspaper page as additive agglomeration of title plus lead plus picture plus caption etc.). This interruption can be said to relate only to the patterns of these visual worlds, their cartography (landscape) or formatting (newspaper), but not to our gaze, which experiences something like continuum as it roams. In the positive sense roaming is also a form of insistence and emphasis, even if it does not correspond to the logic of drama, climax and spectacle. It leads us to perceive real time (or at least surrogates of real time) that can be experienced as a special form of duration and presence, as a time that - unlike medial time - allows us to experience ambivalence, paradox and disorientation simultaneously with lucidity, epiphany and clear-sightedness. (Daniel Kurjakovic) 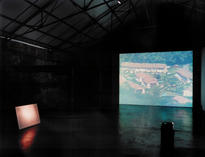