Vanitas is Latin for vanity. A Vanitas painting is a form of a still life consisting of a collection of objects that symbolise the brevity of human life and the transience of earthly pleasures and achievements. Vanitas paintings were most popular in the Netherlands of the sixteenth and seventeenth century. Most recurrent objects in the gouaches and oil paintings from painters by the likes of Frans Hals, Willem van Aelst or Harmen Steenwijck are skulls, candles, hour-glasses and clocks, overturned vessels, books and (fading) flowers. Those objects act as a reminder of the inevitability of death, and the pointlessness of earthly ambitions and achievements. For the exhibition LocusLoppen, the artist Koen Theys built a gigantic installation. ‘The Vanitas Record’ was a three dimensional still life that measured 15 x 20 meters. In the setting of amongst others skulls, books, alarm clocks and candles, Theys placed 20.000 living snails. In the first part of the same titled video ’The Vanitas Record’ – not a documentation of the installation, but a work on itself with different added contextual layers – the camera travels initially along the installation, showing in detail the books, crawling snails, buzzing (alarm) clocks and extinguishing candles. Slowly, Theys adds a second layer of (self) relativity and (self) irony, inserting pieces from radio and television interviews he had on the occasion of building this ‘record’. In the second part, the ‘Vanitas Record’ turns almost into grand guignol, as Theys blows up the already large press and public attention at the opening of his installation to the proportions of a mass event where visitors and press are leading to roaring applause and a bombing of flash sounds. 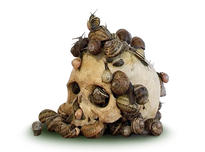