‘Pale Peko Bantu Mambo Ayi Kosake’ (‘Wherever There Are People, Problems Are Never Lacking’) proposes, in the artist’s typically tongue-in-cheek way, an extreme case of how far the rapport of a documentary filmmaker and his subject, along with his subject’s identification with the story, can go. One year after the first free elections in Congo, the artist portrays a group of ‘creuseurs’ – self-organized young workers excavating cobalt from one of the unsecured mines in the province of Katanga. They sell the raw material at uncontrollably fluctuating prices, to middlemen, who, in turn, supply the international market. In the absence of financial security and political or unionized protection, they are an occupational group without advocacy, for whom this work nonetheless offers the prospect of economic emancipation, education, and hence attainment of their fundamental goals in life. When their buyers threaten them with lower prices, they attempt to obtain their rights by means of their own networks (smuggling and mobile telephony). The film accompanies the young men close-up. Through narration provided by Isaac, one of the creuseurs, we are given direct insight into their living and working conditions. Around Isaac the casual comments of the workers unfold: we hear about the white film team, about their own representation and ambivalence toward the erstwhile colonial rulers who they strive to both please and defy. Isaac is, as narrator, also the hero of the story, and “heroes never die”. He is a hybrid of both a real and a fictional character whose performance seems just as committed to the real circumstances as to the dramaturgy of the film, and whose story is of consequence primarily because it helps the film unfold its argument. Thus underneath the morbidly beautiful surface of Van Paesschen’s images and the touching story of a young man trying to emancipate himself from the legacy of colonialism and corruption, the film successively deconstructs its own ethical premises. For instance, as the creuseurs’ plan to circumvent the price dumping of their middlemen through smuggling activities is threatened due to insufficient bribe money, the director, in front of the running camera, promises to assist with foreign currency in cash. In becoming their accomplice, he helps the workers while also serving the interests of the plot. Even more drastically, Isaac reports at the end of the film that while the other creuseurs laid down their shovels, the director encouraged him to dig elsewhere for malachite because “work had to be done”. Yet the new work that Isaac hopes will provide him with a living eventually costs him his life. The disturbing combination of matter-of-factness and melodrama provided by of this ending, which seems to prove once-and-for-all that even heroes die and that the director always has the last word, ironically exposes the naïve belief in the capacity of documentary to provide an immediate and disinterested depiction of reality, while effectively repeating the forms of exploitation it sets out to critique. (Katrin Mundt) 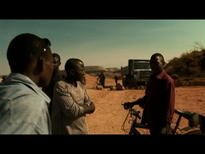 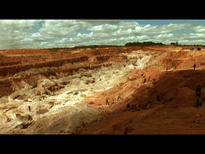