This minimal video installation shows the material filmed by two hand camera’s attached to the belly of a trotting horse on two oppositely placed screens. They simultaneously filmed the movements of respectively the front and the hind legs. The installation received a significant title from Crabeels: Détachement refers to the moment in which all four legs of a galloping horse simultaneously detach themselves from the ground. In doing so, the viewer is explicitly invited to search this dissonant film experience for detachments.
A first detachment can, for example, be found in the game with the context of the exhibition space. When recognizing a horse’s legs and hearing horse sounds, the viewers are immediately reminded of the rural surroundings they have just passed through before arriving on the domain of Speelhoven: the atmosphere of riding schools, riders and horses in a paddock. Just like the historical patrimony has been transformed into a contemporary spot of presentation and the protected ancient farmhouse thus disconnected from its original social functions, the experience of the phenomenon horse is also placed into a new reference frame in this artwork, disconnecting it from its familiar appearance. Instead, it is, among others, approached as a scientific problem.
Détachement actually doesn’t focus on a narrative about, or the symbolics of the horse, but downright on the experience of a synchronized movement of legs that cannot be reconstructed from a human point of view. In doing so, Crabeels returns to the history of audiovisual media, more precisely, to the famous 19th century experiments conducted by Eadweard Muybridge. Through a complicated test set-up of 12 photo cameras, receiving the extremely intelligent name of zoopraxiscoop, Muybridge succeeded in proving that a horse in gallop indeed completely detaches itself from the ground. Wit this reference, Crabeels remembers us that the invention of the photo camera, and later on the film camera, was not only accompanied by an atmosphere of magic and mystery, but also, and most importantly, by a great deal of ambitious expectations. Thanks to the mechanical eye, one is supposed to be able to surpass the limits of the human abilities and reproduce an objective truth that was unreachable beforehand. Nonetheless, Détachement delivers a commentary on this history of the audiovisual medium as a device of truth: using a video installation as experience device, Crabeels opens up a new perspective in which the attention shifts from the truth value of images to a spatial experience. This way, he emphasizes that the first is only possible in Muybridge’s case via a detachment of image and experience. The viewer, standing between the screens, on the other hand, gets the opportunity to experience the unusual middle point from which the cameras filmed. The installation lets us regroup the separate parts again into one combined action. The sound of the installation brings the detached front and hind side of the horse back together in a reliving of an own rhythm and fragmented perception.
We cannot see the actual Détachement anymore now, but we can experience it. While Muybridge and his zoopraxiscoop try to prove a truth we cannot perceive with the naked eye, Crabeels’ video installation illustrates how we cannot surpass our human point of view without a loss of subjective experience. Striking is that this disconnection between eye and eye of the camera, and the discrepancy in experience that goes with it, can also, to some extent, be reconstructed and thus presented through audiovisual media. (Source: Robrecht Vanderbeeken) 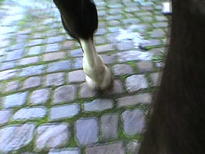 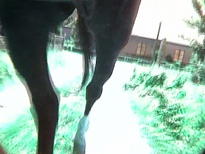 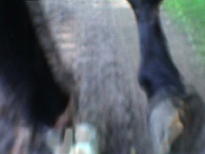 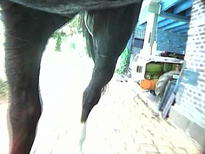