IN THE ABSENCE OF HEROES (PART IV): WARFARE / A CASE FOR CONTEXT

In the Absence of Heroes: Warfare/A Case for Context was part of a continuing series of works investigating social manifestations filling the gaps in our lives through media/corporate and government propagated images and idea(l)s. The videotapes present contextualized concepts/fragments of personal/emotional traumatic experiences and conflict. The influence of the media on the infliction, sustainment and interpretation of these conditions is studied while attempting to understand representations directed by the media, which affect personality and interpersonal relationships. The Introduction videotape (edited from television broadcasts), is one with film beginning and ending credits of war material and audio from National Anthems from around the world, as well as a text read by a man and woman of a list of war movie titles in sequence. The main tape consists of a layering of war movies and other war material selectively edited with fragments of interviews of ex-soldiers and guerrilla fighters as well as additional treated sound. The tapes help to decode the symbols/images of the military industrial media entertainment context which is inherently a manipulator of sensual/romantic pacifier/stimulators. 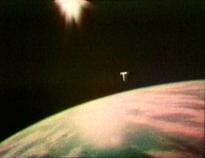