ONCE YOU'VE SHOT THE GUN, YOU CAN'T STOP THE BULLET

Two descriptions:
1/ Shot on location in Beirut, Bikfaya, Byblos, Jerusalem, Jouni, Kelowna, La Jolla, Las Vegas, Limosol, L.A., Mesa, N.Y.C., Portland, San Diego, San Felipe, Tijuana and Vancouver. From accumulated live footage recorded over a period of three years, this piece weaves itself in and out of experiences of differentiation and distance, closeness and otherness and questions of discourse and construction in the viewing and constitution of the subject.

2/ So in this story, there’s this guy this main character, the lead, he meanders throughout and in the end succumbs to what we knew all along, or thought he knew. But this knowledge or whatever you want to call it wasn’t that at all. It was a sense of satisfaction, displaced but real, never the less... I instantly thought of rejection take me away from here, let me leave, and of attachment, unwieldy, moving by, and through.. into and out of, but never letting go, never really getting there.

So, one could say it’s about denial, or actually inability or the construction of it and the allowances made. From a period of time, a collection, it fluctuates between experiences of differentiation and distance closeness and otherness, an unraveling of determination, an ambivalence in place.

Once You’ve Shot the Gun You Can’t Stop the Bullet works with the connections between the metaphorical and the ‘real,’ collapsing landscapes...or exploding the relationship with an ex-lover and juxtaposing the two to play off the extremes and the subtleties of what remains. It uses the schematic, of dealing with culture and nation but transposes any of its substance towards this collapse and regeneration. It tries to be transparent in doing this while retaining the edge of contact with the other, the subject or culture. (from Jayce Salloum) 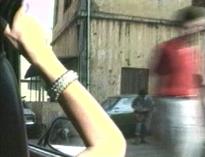