The fifth full feature project of Jan Bucquoy fits in with an encompassing concept of ‘looking at Belgium in a specific way’. In this documentary he follows the 1999 election campaign of two mini parties. On the one hand there is Vivant, the party of Roland Duchâtelet, with a central topic of the right to a basic income for all. On the other hand there is the Dadaist Tarte/Taart (Cake), resurrected from banane/banana (banana), founded by Bucquoy himself, with the anarchist joker Noël Godin as its main attraction. Whereas the first steps up to its voters with a clear programme, Tarte openly admits they are simply in it for the fun of taking part in the elections. Bucquoy’s love for the politically grotesque is here translated into a carefree through a surrealistically coloured piece of Belgium. Casually and impulsively visualised, balancing between satire and political consciousness. These words, for instance, are put into the mouth of Bert Anxious (a play with the name of the former Flemish Minister of Culture Bert Anciaux): “had elections been capable of making any actual change whatsoever to the system, they would have been forbidden a long time ago”. 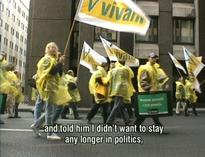 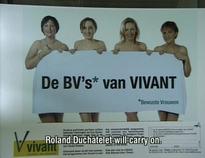 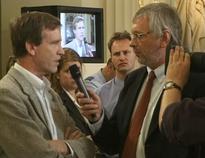 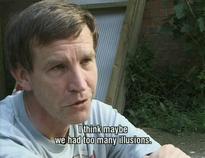