’Storyteller’ takes found stock footage of the cosmopolitan skyline, recomposing and mirroring the images to create a slick artificiality reminiscent of science fiction. At first glance, the viewer might think of space ships floating slowly through the universe, but quickly ’Storyteller’ reveals its source: images of downtown Las Vegas shot from a helicopter. When the camera focuses on building and architecture, the detailed glitter and kitsch of the city reveals itself. Zooming out however, the work evaporates something of pure and simple beauty which is extremely fascinating to look at. Using the relatively simple technique of the horizontal mirroring screen, Provost’s manoeuvres and influences the interpretation of images, carefully balancing between the figurative and the abstract. He manipulates time, codes and form, twisting and shaping an experimental sensation that tightly bind visual art and cinematography. 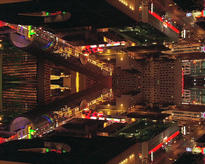