21st June 1986. With over 6 hours of live television the programme De Langste Dag ('The Longest Day') by the BRT network was one of the main participants in the art manifestation Initiatief ’86, an amalgam of exhibitions simultaneously unfolding over several locations in the city of Ghent. Initiatief ’86 came about when a dozen of Ghent art associations and galleries built out a project for which three international curators – Martin, Oosterhof and König – were invited to make their personal selection from the contemporary visual arts in Belgium. This resulted in three exhibitions at the abbey called Sint-Pietersabdij. Jan Hoet, director of the Museum for Contemporary Art, added on a second component to this project – Chambres d’Amis – for which he invited 50 national and international artists with an international reputation to create an original work in as many private homes as possible. The participating organisations also seized the opportunity to develop their own activities. The Museum for Contemporary Art exhibited its collection for an international audience and the artist Wilfried Huet set up an event of his own with a number of colleagues at the socio-cultural centre Vooruit, entitled Initiatief d’Amis. Straight through all of this, a network of satellite links was set up during the opening, enabling artists (Daniel Buren, Panamarenko, etc.), organisers (Jan Hoet, Kaspar König, etc.), critics (Germano Celant, Denys Zacharopoulos etc.) and the audience to act and interact live over the medium of television. A major part of this circuit was established by a helicopter and two mobile camera teams who took on several locations. This transmission does not take a view on contemporary art as its starting-point, but rather an idea about the way images work. Art can suggest, suppose and create assumptions, so how about television? Does art tolerate live television and vice versa? The programme refuses to catalogue art, and it does not offer explanations or guidelines, but it does create an open communication model geared towards action and activity, reflection and discussion, intervention and reaction. It visualises without being reproductive, without being an image or representation. It does display, however, its own activity as a visual medium, an activity which does not express itself in signs of cultural value, but in images of an audiovisual culture.

Content:
In Sint Pieter’s Abbey, Jean-Hubert Martin, Gosse Oosterhof and Kasper König present a selection of artists ; Jan Hoet in the Museum of Contemporary Art will present Chambres d’amis (Guest rooms) (interventions by artists in fifty or so houses and apartments) and a selection of works from the collections of his museum ; Initiative d’amis (An initiative by some friends), an exhibition by alternative artists in Vooruit. The Longest Day links these various sites by audiovisual means. A telephone exchange (Betty Mellaerts, Régine Clauwaert, Wilfried Haesen) allows spectators to participate ; in the Brussels studio, interventions by Germano Celant and Denys Zacharopoulos, with Chris Dercon acting as compere ; three journalists out and about (William van Laeken, Johan op de Beeck and Terry Verbiest). 03’45" In front of the museum in Gent, a concert by the Monnaie Theatre brass quintet. In the studio, presentation of the programme and the exhibitions by Chris Dercon. 07’40" Views giving an idea of the atmosphere in the museum. Jan Hoet and Patrick Dewael going through the rooms and talking together. Pictures of the brass quintet. 09’26" Johan op de Beeck asking Patrick Dewael questions. Daniel Buren’s intervention at the museum, Buren interviewed by Terry Verbiest (Raes van Gaverenstraat 106) in liaison with Germano Celant. 17’15" Work by Panamarenko. Guided tour of the museum by Jan Hoet. The Centre for Art and Culture at Sint Pieter’s Abbey. Guy Rombouts exhibition. 24’20" Jan Hoet interviewed. 26’49" Panamarenko interviewed about art and museums and how they relate to initiatives like the present one. 38’32" The Museum of Contemporary Art. Brass quintet. 41’50" In the studio, Germano Celant and Denys Zacharopoulos reacting to what Panamarenko has said. 50’00" Aerial view of Sint-Pieter’s Square, Gent. Picture of a work by Jan Vercruysse and interview (Chambres d’amis : Vrouwenbroekstraat 25) ; in the Centre for Art and Culture, a work by Roger Raveel and interview. Germano Celant and Denys Zacharopoulos talking about the visual angle obtained by using a camera and about what defines a "professional artist". 1h00’08" Work by Marie-Jo Lafontaine. Comments by Kasper König. Works by Lili Dujourie, Jan Vercruysse, Luc van Soom. 1h14’50" Discussion with Roger Raveel ; what can television do for a work of art ? 1h18’00" Work by Jacques Charlier. Comments by Kasper König and Jean-Hubert Martin. Work by Raoul de Keyser. 1h27’00" Guy Rombouts. 1h29’30" At Gelukstraat 55, Jef Geys talking with local people. 1h36’26" Kasper König presenting a work by Rene van Heyvaert. 1h38’00" View of the city of Gent (e.a ; Gravensteen). 1h39’14" A work by Jef Geys presented by Kasper König. 1h42’35" At Drabstraat 12 {Chambres d’amis), Charles Van Denhove. 1h46’30" Jean-Hubert Martin explaining work by Narcisse Tordoir and Walter Swennen. In the studio, Chris Dercon, Germano Celant and Denys Zacharopoulos explaining the absence of Harald Szeemann and the form the programme is taking. 1h52’07" The brass quintet. Inner courtyard of Sint Pieter’s Abbey. Daniel Buren. Speech by Jacques Monsaert, Mayor of Gent. 2h04’30" The telephone exchange. Jef Geys and Panamarenko eating together. Jacques Monsaert talking with the public. Commentary by Denys Zacharopoulos (picture inset). Declaration by Patrick Dewael. 2h20’00" Bruce Nauman at Monterreystraat 13 (Chambres d’amis), commentary by Denys Zacharopoulos (picture inset). Speech by Wilfried Maertens. 2h34’00" William van Laeken interviewing Panamarenko and Jef Geys. 2h37’20" View of a work by Joseph Kosuth (Coupure Rechts 90), discussion between Terry Verbiest, Denys Zacharopoulos and Germano Celant. 2h48’00" Denys Zacharopoulos and Germano Celant criticizing images and the increasingly popular nature of art. Jean-Hubert Martin talking about art as a spectacle. Brass quintet. 3h00’00" The telephone exchange. 3h03’45" Installation by Guillaume Bijl (Initiative ’86) and interview. 3h06’27" Oswald Oberhuber (Fortlaan 18, the block where Jan Hoet lives). Interview with the inhabitants. Homage to Victor Servranckx. 3h17’07" Kasper König, Denys Zacharo­poulos and Germano Celant talking about the selection criteria. 3h23’20" A work by Rob Scholte {Chambres d’amis, Pussemierstraat 20) and interview. 3h30’00" Pictures giving the atmosphere at Sint Pieter’s Abbey. Francois Hers, Initiative ’86 (Centre for Art and Culture). Studio, Chris Dercon. Telephone exchange, spectators’ reactions. 3h44’00" Niek Kemps (Jakob Heremans-straat 43) talking to Denys Zacharopoulos. 3h48’00" Paintings and performance by Jacques Charlier. 3h51’50" A work by Marcel Marien and interview with William van Laeken 3h54’45" W. Sengers presenting a work by Raoul de Keyser. 4h07’10" Guy Rombouts at work and giving a class (Centre for Art and Culture). Mario Merz (Willem Tellstraat 20) in conversation with Germano Celant. 4h16’30" 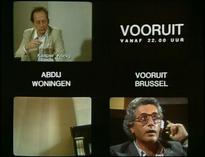 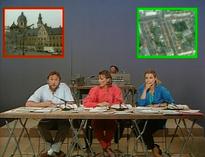 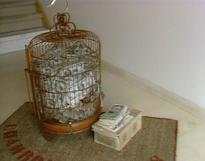