"The film is a cinematographic encounter of two ways of looking – those of the painter Arié Mandelbaum and the film-maker Boris Lehman – and of a voice, that of the singer Esther Lamandier (Both Arié’s and Esther’s names mean almond-tree). This triple encounter of music, painting and cinema takes place in one single place: the familiar surroundings of the painter’s studio. Canvas and screen are one, paint is everywhere: on the floor and the ceiling, in photographs, in books and on the painter’s daily objects. And the paint itself is engulfed by music, and transformed by it. Library for the memory, museum, opera stage or concert hall, the studio turns into the magic mirror of art. In the middle of this setting stands Arié Mandelbaum. The camera enters his world and travels through it, exploring every corner, uncovering its very privacy. To share the artist’s solitude and enclosure may be the only way into his painting. No explanations are needed here, no biography. About the painter, only the name will be known, a few gestures, a few words, very little - hardly anything." (source: www.borislehman.be) 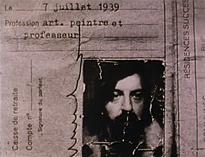 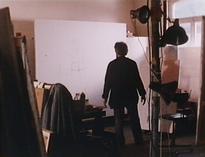 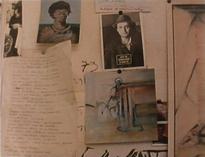 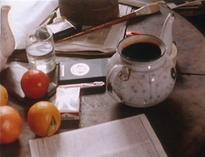