Edith Dekyndt’s work seeks to move us by means of nothing or almost nothing. Things are made and unmade very quickly, and it is this speed between appearance and disappearance, sometimes slowed down to be lost, which makes up Dekyndt’s images. She is interested in simple things, things that already exist in everyday life, things we normally wouldn’t notice they exist. She doesn’t make up these things but uses them, associates them, films them. She only shows us what happens when there is nothing happening. Günter Grass has one of his characters saying “television has made the void in me”. Is Grass aware that those cathode-ray tubes are rich and famous? They live in posh parts of town, in Hollywood. It is not in them that Dekyndt is interested. When she is in a position to invade their modern ‘châteaux’, she goes to look elsewhere: at the garden, the walls, and the flowers. She sets up some sort of lighting device, rather odd, quiet ‘do-it-yourself’. First she takes a look around, a Polaroid snapshot of the place. When the camera spits out its photo, still blank at that moment, Dekyndt now films the process of the genesis of the image: the manner in which it appears. Making space for an appearance, in one of the sacred places for appearances, has a bit of an air of iconoclasm. There’s certainly something bold about penetrating into such opulent places as these like a nomad would, gradually and without money. Because appearances do not appear: they do the contrary. 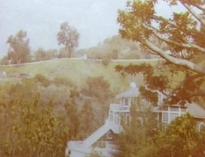