After his first solo work (Vanity, 1999), The Princess Project was originally intended to be a duet man-woman as a tribute to the classical pas de deux, for which Vincent Dunoyer reworked the traditional figures: pirouettes, portés,... . As a partner Dunoyer had chosen a female friend with an androgynous physique, about his own height and build. When she became pregnant, she had to cut short the project, which added a romantic dimension to the future performance: the theme of the absent loved one. The pas de deux thus literally becomes “not the two of us”. Dunoyer therefore adapted the work. With a fixed video camera he recorded part of the performance; he then projected this part on a screen and mixed it with another pre-recorded part, thus producing a fictitious duet of a dancer and his alter ego. Encounter, first act, second act, separation: the dramatic structure of the performance is based on P.J. Castellaneta’s film Together Alone (1991), featuring a brief encounter of two men called Brian and Bryan. 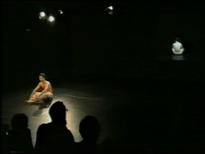 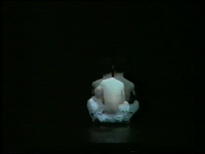 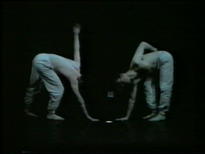