“Exquisite corpse: a game in which a phrase is composed by writing a word on a piece of paper that is then folded before being passed to the next player.” (Dictionnaire Le Robert)

The principle of the choreographic writing that underlies Cadavre Exquis is the same that underlies the game invented by the surrealists. The work is a combination of various dance fragments that were created by thirty-three first-year students of the Brussels dance school P.A.R.T.S, none of whom knew what the others would contribute. For the performance, thirty-three photographs from the choreographic score of Solos for Others, Dunoyer’s previous work, were reused. Every student received two photographs, one serving as the point of departure, the other as the ending, i.e. Dunoyer asked them to create a short choreography (of about twenty seconds) that linked the two, which was then recorded on video. The photograph of the ending of one student served as the point of departure for the next; thus it was possible to present the thirty-three choreographies one after the other to create a single sequence that became the framework of the performance.
The performance is actually composed of three parts. In the first part, Dunoyer presents a solo performance of the sequence. He then leaves the stage and the public can discover the video, in the same choreographic order, each of the thirty-three students dancing the fragment he or she created. When the video is finished, Dunoyer re-enters the stage and performs the choreography once more. But now the public views its creation and meaning in a different light then at the start. The dance is whose? What or whom does it refer to?

For the choreographer and his apprentice dancers the performance provides an opportunity to swap roles: the students become the creators, whereas the choreographer takes it upon him to perform as accurately as possible the heterogeneous score that was entrusted to him. 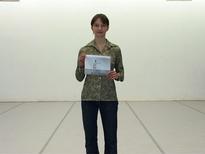 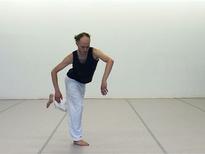 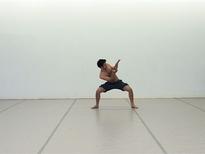 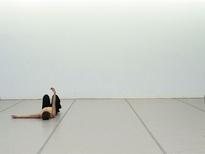 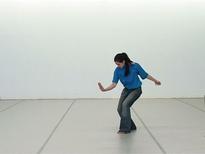 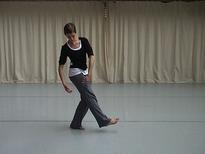