Polyphonic music developed in the fifteenth and sixteenth centuries in the courts and religious centres of Europe, and was a method of composition whereby the various voices were treated as wholly or partly separate from each other. In Polyfonisten, an identical line of thought is expressed in a mirror-like perspective of history as seen through the eyes of today. The music of polyphonic Flemish composers such as Agricola, Dufay, Ciconia and Desprez, performed by Paul van Nevel’s Huelgas Ensemble, is used by Decostere in various framings within the picture on the screen as an effective illustration of this originally fragmentary style of music. 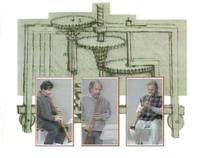