The film is shot entirely within the site of the Cité Administrative in Brussels. In an interview during the early stages of this project, Peter Downsbrough said : " I use film to introduce time within my observation. Its very unfolding makes film the ideal means to do this". Rosselini underlined that "something happens in film because of time, of the specific duration constructed by the film itself". In his work ’Going Around The Corner Piece’ Bruce Nauman, inspired by camera surveillance systems, produced a delayed image of the spectator going through the work. Peter Downsbrough’s image reflects and leads us to construct a simultaneous recollection of the past, present and / or future existence of a multitude of successive propositions. 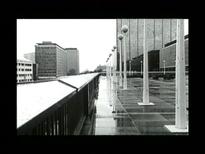 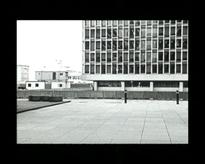 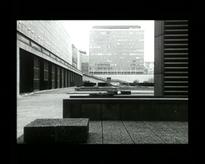