This video, shaped as a triptych, was part of the performance by Ictus and Rosas with the same name, based on a choreography by Anne Teresa De Keersmaeker. In ’Counter Phrases’ the traditional relations between dance, film and music are reconfigured. Thierry De Mey directed a number of short choreographies, some five minutes at each time, based on fragments from the piece ’April me’ by Rosas. They are not neutral dance registrations, but interpretations with an outspoken cinematic character and an intensity of their very own. De Mey situates the choreographies in gardens and parks: a stairway in the park at the castle of Terhulpen, the terraces with boxwood hedgerows of the Groentheater or a piece of industrial archaeology at the Provincial Domain of Hofstade – they all become active partners of the dance. The dynamics of the editing and split-screens betray a flawless sense of rhythm and a strong musical sense, the use of colour, light and costumes show a strong formal sensibility. Ten composers, among them Steve Reich, Magnus Lindberg and De Mey himself, wrote a score based on the choreographies and the finalised films. Most of them opted for a delicate support of the patterns and movements on the video, starting from a rhythmical approach or an evocative world of sound; others preferred a Cage-like autonomy for their music. In that sense film became a mediator in the search for a new dialogue between dance and music. A dialogue which isn’t always as fluent, as Luca Francesconi, one of the composers, points out: "Each language is a universe of its own, you have to struggle to find a relationship between them." 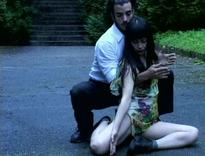 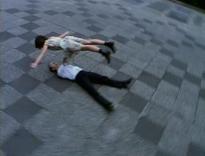 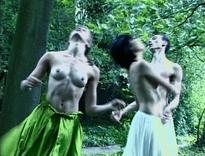