This publication consists of two parts, a DVD and an anthology of stories. Both of them focus on ‘the joy of storytelling’; the opening up, releasing and losing of ideas. Vromman looks for his inspiration in the tiny, the trivial within his own world of experience, weaving his observations into a multifarious patchwork of narrative styles and articulations.

On the one hand the DVD ’De stoel waarop ik zit’ (‘The Chair I Sit Upon’) comprises a selection of his former work, often revised throughout the years, on the other it contains a long series of new films. It seems Vromman has found a friend and accomplice in the DVD-medium, capable of shaping his specific way of storytelling. The multitude of ideas, distinctive shapes and nuances he uses tie in with this specific structure. In the great audio-visual story – the feature film – small observations and imaginings are often lost in their serving role with respect to the whole. They lose their singularity. A face is selected depending on the other; all the faces together should tell a single history. It is investigated how the tiny story can be rebellious and unruly. Each piece preserves its independence, and yet together the separate stories tell a single story.

The twelve selected and adapted films from his former work, among which the often laurelled ‘De zege van de Slang’ (‘The Triumph of the Snake’, 1985) and ’Gent, 10 Juni 1989’ (‘Ghent, 10 June 1989’, 1989) implicitly refer to the notion of ‘multitude’, whereas the forty-three recent films precisely have this interaction between multitude/unity as a starting-point. They are clear, impulsive observations, deeply rooted in Vromman’s familiar environment. Often personal contemplations are raised, in word or text, without formulating explicit answers. The viewer gets a letter of safe-conduct to a wilful worldview - a way of perceiving and contemplating – but he needs to finds his own way through.

A number of stories, unsuitable for an audio-visual approach according to Vromman were moulded into short prose pieces. Sometimes observations cannot be contained into images; the imagination, rather, allows itself to be guided by the suggestive power of words. ’Voor een kleine prijs is veel te koop en al de rest is gratis’ (‘At a low price a lot is for sale, and all the rest is free’) offers some fifty written-down stories, often pungent descriptions of memory images, alternated with longer accounts, bound by time. Here as well there is a central focus on multitude. No choices were determined towards a stylistic unity or a thematic link, the meaning becomes apparent through the sum of its parts.

The overall picture constitutes a multi-coloured mosaic of impressions and observations, in word, image and sound. Vromman is impulsively led by his enthusiasm, rather than vision. His worldview is intertwined into the minimal gestures that make tiny people so great, into the woolly rhetoric and the almost childlike commitment, revealed in his stories. Unity emerges out of multitude, vision is generated by inspiration. Like a spinning top, the stories revolve themselves around the tiny, intimate experience of Vromman. Even though often critical and concerned in tone, tenderness and hope ring out most, from a conviction that tiny gestures can carry greatness within, for everyone who wants to see it. 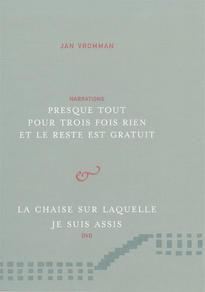 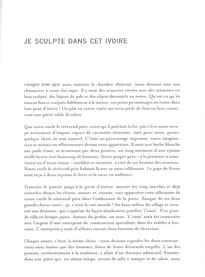 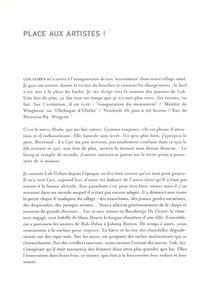