“I was born in the early 1960’s, and for years took for granted the existence of the state of Israel. My political consciousness was formed by the 1967 occupation, the injustices it led to and the urgent need to reflect on them. As a young leftist, I was raised to believe that 1948 was a distant disaster, irreversible and less acute than the endless injustices that resulted from the 1967 occupation. Years of research on citizenship and photography made it clear that the occupation was part of the Israeli political regime, and that reconstructing its schema should start in 1948”.

Is it possible to break the deadlock of the present and imagine a different future through a revisiting of the past? The theoretical and curatorial work of Ariella Azoulay is grounded in an exploration of this possibility: using the events that occured between 1947 and 1950 as a prism, she proposes a civil perspective on the history of the Israel-Palestine conflict, one that turns away from the framework imposed by the paradigm of an unavoidable and irreversible national conflict. It is a perspective that encompasses all the inhabitants of the territory, both Jews and Arabs, which allows to reconstruct the collision between them as a product of the war. The violence inflicted on the Palestinians positioned them as the enemy of the very people with whom they had previously shared their lives, which gave way to two distinct narratives – one culminating in the creation of the state of Israel, the other situating the nakba as the constitutive event of Palestinian identity – both of which are oblivious to the origins of this division. In order to reconstruct this past, Azoulay has created an archive of photographs that have been preserved by the same regime that has previously made great efforts to erase its traces, setting limits on what can be seen and what makes sense. But an image is always more and less than itself: it can not be reduced to the intention that has produced it, nor to the meanings that it supposedly reveals or conceals. The work of Azoulay consists of undoing the dominant connection between these images that speak and the discourse that keeps them silent, by making them speak in another way, linking them with eyewitness accounts, diaries, memoirs, minutes and memoranda. In proposing to think in civil terms about a place steeped in hopelessness, she tries to open up a new horizon of civil living for both citizens and those denied citizenship, as inevitable partners in a reality they are invited to imagine anew.

This Dissent! session takes as starting point a selection of films, chosen by Ariella Azoulay, that deal with the impact of the events of 1948 on Palestinians and Jews. Documenting something that goes beyond the suffering of the victims and the glory of the victors, transcending more conventional expectations to either expose details of the catastrophe or veil it from view, these films enable spectators to witness a variety of forms of Jewish-Palestinian co-existence to which the event of 1948 put an end. These films will be shown on 15 December and 18 December.

Talk with Ariella Azoulay proceeded by a screening of :

Khirbat Khize is a TV drama directed by Ram Loevy in 1978 based on a novel (bearing the same title) by S. Yizhar, published in 1949. The novel is a step-by-step depiction of the expulsion of Palestinians by Israeli soldiers. One of the soldiers repeatedly questions their deeds. The moral voice recurds and so its rejection by the others, in ritual-like form. This ceremonial repetition, which the movie makes more explicit, can be read a a rite of passage through which Jews in Palestine became the masters of the land. Since the 1960s, the novel was included in high school curricula. In 1978, when the film was to be broadcast, the Minister of Education and Culture banned it and the workers of the Israeli TV turned spectators’ screens dark for 50 minutes, the duration of the movie.

Al-Midya was chosen as the location for shooting the film Khirbat Khize in the mid-1970s. The villagers did not see the movie until Dani Gal, the director of this film, went to the village and screened it. The film documents the encounter of al-Midya’s residents with the movie, but no less so, the way they experienced in the late 70s the arrival of a troop of actors dressed as soldiers to shoot a movie that revives the expulsion of 1948. In the absence of subtitles in Arabic (in Khirbat Khize) one of the local residents serves as a simultaneous interpreter. The Israeli soldiers’ words dehumanizing the Palestinians, repeated in Arabic by a Palestinian, produce remarkable moments of estrangement. 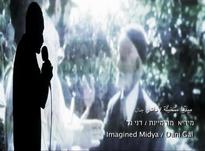