In their collective work, Jan Dietvorst (1953) and Roy Villevoye (1960) challenge the conventions of the documentary in their treatment of anthropological and post-colonial themes. They present footage shot without voiceover, superimposing a linear narrative, or building up to a climax, raising more questions than they answer. Filmed in Papua New Guinea, The Bishop & The Doctor (2002) presents simultaneous footage of two different scenes, allowing them to comment on one another. Beginnings (2005) confronts us with the Western longing for a myth of origin. The split screen projection in Owner of the Voyage shows the journey of two Asmat people to The Netherlands simultaneously with a commentary on their travels. Scrap Iron Age (2008) takes us to northern France, where First World War relics still influence life. The respective interests and expectations of Westerners and Papuans form the focus of And the trumpet shall sound (2008), while Phantom (2008) depicts the transformation of a structure into a symbol. Finally, their 2009 work Pressure looks at life in the ants’ nest of Mumbai. 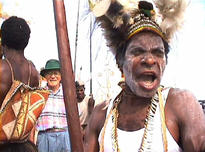 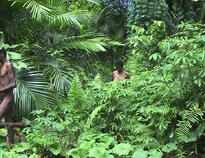