However unambiguous reality might be or seem at first sight, in the work of Sven Augustijnen it is always unravelled as a complex and troubled subject. His video work explores the boundaries between report, research documentary and docu-soap. Appearance and reality go hand in hand, balancing on a fine line between revealing and concealing.

Having turned upside down the site of the Kunstberg in Brussels in Mission Mont des Arts (2002) Augustijnen turns to WIELS with Une femme entreprenante, a new centre for contemporary art now in scaffolding in Forest. The figure of Sophie Le Clercq, building promoter and ‘la force motrice’ behind this cultural project on the site of the former brewery of Wielemans-Ceuppens is at the centre. On the one hand this video might be considered a hommage to the forceful woman who is in charge of the building promoter CIT Blaton; on the other the author uses Le Clercq, who appears on screen only rarely, as a catalyst for all kinds of historical and genealogical trajectories on urban development in Brussels. As if by coincidence these trajectories get more and more entangled in the jumble of art, brokerage and politics, ‘le marais de Bruxelles’.

A fierce ‘journalist’, a highly enacted contraction of ignorance, enthusiasm and astonishment, takes the audience in tow for a further acquaintance with the protagonists behind the WIELS-project. In a saga full of unexpected complications a number of other actants from the political-economical and cultural world in Brussels casually pass in review.
Augustijnen switches between the age-old dream of setting up a contemporary art centre in Brussels and subtexts like the genealogy and the achievements of the Blaton dynasty or the downfall of the brewery sector in Brussels. In this documentary, shaped like a ‘report’ without actually being one, he manages to tie in widely divergent realities with great ingenuity. This results in a play between communicating vessels, the various levels of real estate, heritage and art intersecting with each other in predictable as well as surprising ways.

Une femme entreprenante puts the spectator at the centre of an all encompassing mosaic of perspectives. Augustijnen undermines conventional documentary codes or subtly erodes them. Between fact and fiction, truthful social representation and voyeuristic entertainment various cross relations take place. Stylistically, for instance, the way games are played with the relations between cameraman, interviewer, interviewee and producer creates situations way past the predictable or immediately legible codes of the audiovisual practice and the immediate legibility by the audience. In short one might say the audience is taken to a middle area where he would never come in other circumstances. 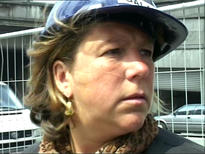 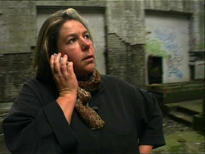 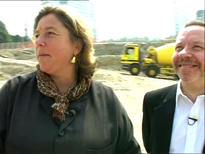