An interview with architect Rem Koolhaas in the building of his architectural firm OMA (’Office for metropolitan architecture’) in Rotterdam. Koolhaas discusses his major, mainly Dutch, projects making use of drawings and scale models, none of which were actually realised at the time, though soon after they all turned into points of reference in today’s discussion about architecture: among others Exodus Londen (1972), City of the Captive Globe, New York (1972), Swimming-pool (1976), Welfare Palace hotel NY, (1977), Parliament at the Hague (1978), Residential Area Berlin (1980), Danstheater the Hague (1980), Residential Area Amsterdam Noord (1980) , Panopticon prison Arnhem (1979-1980), Parc de la Villette Paris (1982), Expo Paris (1983) and Office Tower Rotterdam (1984). Cornelis makes Koolhaas present himself, but in such a way that it’s really he who is presenting Koolhaas. The stage setting in a dark projection room situates the architect in a mythical perspective, but it also reveals his fundamental solitude and vulnerability. When he does appear out into the open, Koolhaas turns into an enlightened entrepreneur, an architect who wants to make buildings leaving all the rumpus behind and at the same time undermining apparent cohesion – architecture, not as a composition but as a situation. The discourse of Koolhaas seems clear and self-evident, but this clarity is like a rebus – even though it is also like a poem, in which the essence of Koolhaas’ attitude is revealed in a direct way, in the rhythm and the editing of the images themselves. On the one hand the balanced construction brings the paradoxical aspects of Koolhaas’ work to the foreground, but on the other it also reveals its internal coherence. 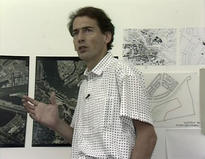 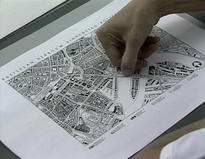 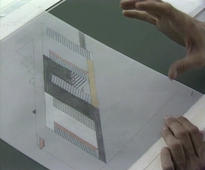 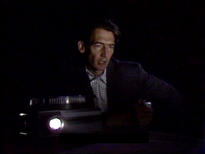