FIGURES OF THE EXTRA

On the basis of a range of carefully selected film fragments, Paul Willemsen, artistic director of Argos, explores the subject of how extras manifest themselves in classic and modern films. To begin with, he sketches a typology of the extra. This necessarily departs from classic cinema rooted in the studio system, in which action is the expression of a reality previously drawn from the film scenario. Facets that apply: physiognomy, camera consciousness, temporal economy, dialectics between foreground and background, and how characterisation is realised through interaction with actors. In the second instance, post-war modern cinema is highlighted. This emanates from the primacy of reality. There is no longer talk of the traditional psychologically coloured and motivated film characters. The identifiable feature of modern cinema is playing on the dual status between the fictive and the real figures, as well as on the individuals – and therefore individual extras and non-professional actors – to get to the forefront. With fragments from films by Eisenstein, Chaplin, Capra, Renoir, Fellini, Pasolini, Watkins, Godard and others.

Figures of the Extras is a co-production between argos and Cinematek. 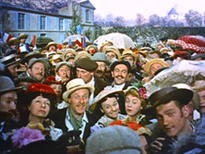