Through a number of conversations ’Europe from Afar’ relates the Levantine projection of Europe as it is found in the book by Jacqueline Kahanoff ’Vom Osten das Licht’ to other projections inside the continents as well as outside them. While the conversations take place the mobile character of the projections transcends their search for a location and unfolds the inherent capacity of the projection surface to record distinctive projections. Sometimes it is a ghostlike whisper during an exhibition on Coptic art in Paris, sometimes a world exhibition, which, between the protection of our country borders and the technological crossing of borders, marks the start of a future Europe. Image and sound abandon their role as a carrier of identity in order to become the publicitary media that commercialise their projections. 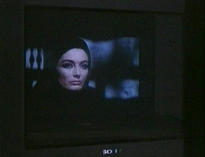