LAWRENCE WEINER - A BIT OF MATTER AND A LITTLE BIT MORE

The conceptual artist Lawrence Weiner (b.1942) defined art as "the relationship of human beings to objects and of objects to objects in relation to human beings", a premise that defines the core of his own work to date. Weiner touches on the unending diversity of cultural and physical phenomena and examines verbal characters, graphic elements and punctuation as a means of overriding conventions, hierarchies and borders, producing works that are simple and complex at the same time, while always challenging viewers to reconsider their conception of the world.


A Bit of Matter and A Little Bit More
Video, 23’, 1976.
’A Bit of Matter and A Little Bit More’ places individuals next to objects and language, in a kaleidoscope of possible layers of interpretation. The images in this work are of an explicit sexual nature. At the time the artist wanted to react to the underlying pressure and censorship applied during the 1970s in the United States (Weiner explicitly expressed his solidarity with the crew and the main character, Harry Reems, from the legendary porno film ‘Deep Throat’ (1972), people who became involved in legal procedures for the spreading of pornography, amongst other things). Further to this – and moreover – the work forms an exploration of the artist’s interest in materiality and language. In ’A Bit of Matter and a Little Bit More’ the man/woman relationship is central. The opening shot is just like a hardcore porn film; without any introduction (read: foreplay) Weiner shows intercourse between a male and female. Thereafter the camera pans to a point on the floor whereby it discovers a circle with a pole, drawn in tape. Then we see a woman – the protagonist in the video – who reads aloud from ’100 Rocks on a Wall’, a publication by Lawrence Weiner from that same year (Lund: Edition Sellem, Archive of Experimental and Marginal Art, 1976). The radical and groundbreaking ’A Bit of Matter and A Little Bit More’ mixes hardcore sex with suggestive symbolism and philosophy. This conceptual and politically loaded work poses questions on sexuality, as well as on language as a material object. Verbal characters, written documents and graphic elements that override the conventional hierarchical structures and borders, turn up in language and text. Words, syllables and (single) letters slip in and out of the image, often imitating the movements of the filmed subjects.
This work also contains a series of (clashing) dialogues. "Do you think there is a difference between fucking and making love?" muses a voice. At the same time the protagonist meditates on sexuality in a direct though extremely playful manner. "Some people are really into breasts and other people are into hips...and other people are into eyelashes and others nostrils... you can have sex with your ears." 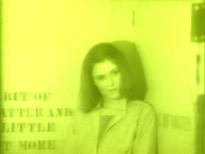