Jordi Colomer (Barcelona, 1962) has in many of his video installations, in which contemporary architecture and cityscapes serve as the setting for a fiction, studied the way in which the modern city influences human behaviour and explores the ubiquity and drawbacks of modernism in the urban environment. Attentive to the sociological, psychological and philosophical dimensions of his subject, but also to the overlooked, weird or incongruous aspects of the everyday, Colomer speaks with great critical lucidity of life’s small print, of the question of difference and the unease it engenders, and about the relations between the city and its architecture. In 2010 he has participated in group shows at the Frac Pays de la Loire in Nantes, the National Museum of Photography in Copenhagen, The MOCAD Museum of Contemporary Art in Detroit, the Centrum Sztuki Wspolczesnej in Torun (Poland) and the Bronx Museum for the Arts residency program. And 2009 saw a major solo show at the Jeu du Paume in Paris. In 2011 he will have a solo show at the Bozar and Argos in Brussels. 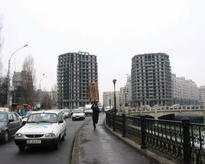