‘Taste the World’ explores tourist notions of the ‘Third World’ as a playground for Europe. The title is derived from a promotional brochure in which travellers are encouraged to “taste the world”. The subtext makes clear that this ‘world’ is mainly there for the Eurostractrates with their unbridled leisure time and financial means. The (‘Third’) world is represented as an infinite domain for consumers with an unlimited offer: culinary, sexual, economic and cultural. This narrative line is intertwined with the story about the voyage and return of Sarah Bartman, the South-African Khoi woman put on display in Europe during the eighteenth century as an example of ‘primitive’ sexuality. After her death part of her body was made available to museums. Only in 2003 she was repatriated and buried in South-Africa. The film was made from charcoal drawings, filmed with 16mm, processed and re-filmed, allowing for a full sequence to be told by a single drawing. Similarly to William Kentridge the traces of the adaptations are not fully erased, they are like shadows, constituting a history of the image. In ‘Taste the World’ a voyage is drawn out, from ‘modernity’ over ‘pre-modernity’ and back again, raising questions about the way in which Europe chooses to ignore non-European modernity. 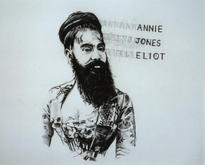 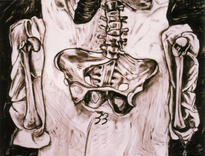 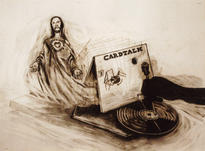