Harald Thys and Jos de Gruyter make videos in their own typical style. Man is hardly a pawn in a game of chess, a tragicomic puppet functioning in a system which surpasses him. The style is minimalist, the characters are determined by the structure and they are limited in space, language and movement. The makers draw their inspiration from different movements in the world of cinema and television: from meditative cinematography by Bresson to soap-aesthetics. This results in an alienating universe, as absurd and grotesque as it is enigmatic. In 'The Spinning Wheel’ a woman exhorts her magical powers onto two young men. Because of the fixed camera viewpoint and the inert rhythm we seem to be dealing with small tableaux, hardly moved by the tiny gestures and the indolent dialogue of the characters (dubbed over and recorded by the makers themselves). De Gruyter and Thys put forward an exceptional and self-willed model of situations and characters, as tragic as they are absurd. This model raises questions on the norms and limitations of ‘normality’. Thys inspired himself on his working experiences in psychiatry and he switched the point-of-view: “it is their (un)human surroundings which the affected people qualify as ‘alienated’ and ‘abnormal’. It is an environment lacking in spirituality or love.” 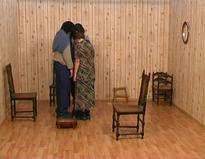 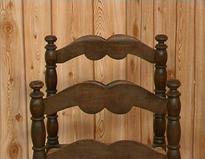 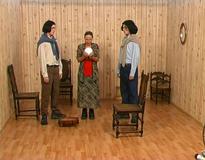 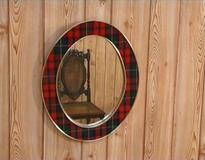 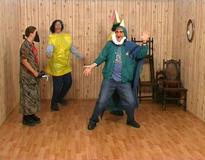 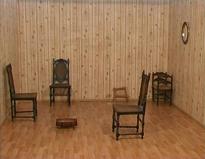