BOY / ANALYSIS: AN ABRIDGEMENT OF MELANIE KLEIN'S "NARRATIVE OF A CHILD ANALYSIS"

Disrupted identities and unconscious dynamics are ever-recurring motives in Steve Reinke’s work. With great rhetorical suppleness he ties together observations and speculations on ego, sexuality, nostalgia and artistic practice. The content of the rogue computer animation ‘Boy / Analysis’ is perfectly illustrated by the integral title, namely, a drastic abbreviation of Melanie Klein’s 1961 key study on child psychology. The initial 93 sessions the psychoanalyst booked with a ten-year-old boy, are reduced down to 16 by Reinke, and thoroughly illuminated. Tumbling around, appearing and disappearing against a black background, are text fragments. A score from Benjamin Britten orchestrates this semantic ballet in which the most arbitrary associations can be made. Colour illustrations, a copy of a drawing of the child that was recorded as an appendix in Klein’s book, and comparable naive sketches that Reinke received from artist Emily Vey Duke, follow as coda. Seldom did Reinke – always working with archival material, found footage or his own memories – go so far with his irony as to instil new life into dead material. The destabilising of the individual, one of his fixed points of interest, rises to the top here with an unsurreptitious lightness. The black background against which the text fragments appear in folds, give one, as viewer, the oceanic sensation of a universe, thought from the devouring black hole of the unconscious. 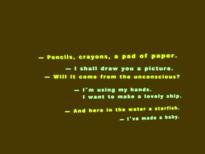