Edith Dekyndt used in 1995 Galerie L’Escaut as a laboratory, in a traditional scientific sense, to exhibit a dense series of ongoing and lengthy time-based ‘experiments’ impinging on a territory between the practices of sculpture and performance. Piece in progress, as if mimicking the formal research procedures , shat on shelves, hung on the wall or were scattered across the concrete floor. Edith worked at L’Escaut for the duration of the exhibition and spoke with visitors to the space. her method summons a variety of hypothesis touching on life and death, the delicate balance between man all living things, as well as the history of art and the space of exhibition. The majority of studies underway involved the transformation and testing of some sort of material be it a scrap of fabric, a loaf of bread, a lemon or a measure of milk. During the course of a so-called experiment each substance was undergoing a process/ some were absorbing, others melting, freezing, soaking, drying , and still others decaying. For one exhibit, Edith filled a small rectangular fake fur volume with milk which she then placed in the freezer. Once frozen she removed the solid form and placed it on the floor leaving the milk to melt, to return to liquid, to assume its earlier characteristic qualities, to bleed out, to form a creeping white pool on the cold hard gray floor. However in the context of the L’Escaut project, the drying lemon is interconnected to a whole ‘eco-system’ of soft forms that absorb, leak, melt, dry, freeze and evaporate. It is possible to conclude that the small synthetic fur ball sited on the floor, some distance from the lemon, is actually robbing the fruit’s very life, not to mention the life of anything else nearby. The innocent toy-like ball is filled with moisture absorbing particles : humidity collects within the object only to seep out as water. The liquid trickles out form a small opening onto the concrete floor. Inadvertently, this investigation has the ability to make spectators conscious not only of their bodily processes, but also of their place in a intimate network linked their immediate surrounding and the larger environment. Such a sculpture recalls Hans Haacke’s sealed Plexiglas Condensation Cube, 1963-65. Haacke’s cube responds to the temperature of the room it is place in. Evaporating, condensing and evaporating again : the water is locked into an isolated and repetitive performance specific to its location. Stitched together by hand, yielding and round Dekyndt’s ostensibly virtuous plush ball by its ethically questionable ability to drain moisture from all matter within its sphere of influence including the artist and the spectators themselves only to later expel the liquid as if waste. Galerie L’Escaut’s hard but somewhat romantic industrial qualities provocatively frame the artist’s project. The building itself has undergone a major transformation. Worn out, no longer useful industrial life of Brussels and in an era of electronics, it has been converted into a gallery, office and living space. Yet the building oozes with the memory of its first purpose and such history is bound up with the once viable story of scientific and technological progress. The very presence of the artist’s modest, low-tech and somewhat naive procedure in the former warehouse/factory space of L’Escaut gently pokes fun in a self-reflexive manner at very existence of the now highly suspect notion of progress. Dekyndt’s work is not easily defined, however her use of ‘poor’ materials combined with a strong presence of objects introduces a hybrid category relying on a marriage of the material aspects of Arte Povera to a soft, organic and messy Minimalism. The experiments and the materials used articulate a knowing ingenuousness . The simplicity of the individual ‘experiments’ with their generous sense of play and humor, underscore the complexity and seriousness of the darker themes embodied in the L’Escaut project. 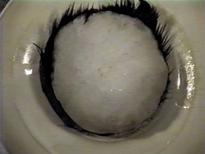 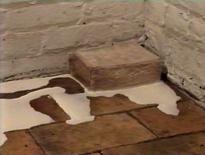 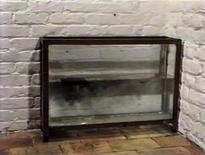