In 1932 Stan Laurel and Oliver Hardy shot ’The Music Box’, a remake of ’Hats Off’, their silent movie from 1927. The location in both films is the same; the only thing that is different is the object the movers Ollie and Stan have to drag up: in the first draught it is an automatic washing machine, in the second a piano. Both films end in turmoil, in the case of ’The Music Box’ the total destruction of the piano and all other interior pieces that come into contact with it. To Jef Cornelis and screenwriter Bart Verschaffel the film becomes an inspiration and an alibi for a TV-programme – in its turn based on the Container series they made in 1989 – which investigates the theme of bourgeois mentality and the interior in the art of Hernri De Braekeleer, James Ensor, René Magritte and Jan Vercruysse. The leitmotiv is the piano, or more precisely, the bourgeois longing to put up a piano at home. The piano, this imposing musical instrument, both an instrument and a piece of furniture, is used here as a symbol of the difficult, instable position of art in the civilian way of life. Art (superfluous, luxurious, a waste, the piano, the woman) is both what bourgeois culture wants and what it doesn’t want. It longs for art, and at the same time art is considered to be dangerous, something to be kept outside. ’The Music Box’, the film in which Laurel and Hardy deliver a piano at the home of a woman at her request, only to see it smashed to pieces by her husband, is behind the title and the theme of the film. De Braekeleer, Ensor, Magritte and Vercruysse are all artists who, each in their own way, accept the middle-class way of life and use it as a basic ingredient for images and an art form which can no longer take place inside this middle-class mentality. They start from the inside, but they alienate it. They start from the apparent calmness of bourgeois life, the protected ‘inside’, but they activate the inherent, hidden efforts and conflicts ‘blowing up’ the interior. All four they turn the question of what the place of an artist might be – being both ‘inside’ and ‘outside’, middle-class and alien – into a theme of their work, similarly to the theme of the woman and femininity – both what is the product of the interior and the home, and what threatens the home and middle-class behaviour. The film consists of a prologue, three near-monographic chapters about De Braekeleer, Ensor and Magritte, and a final part into which the other works merge. Images of artworks are alternated with fragments from conversations with various guests, illustrating the intention of the director and the screenwriter. 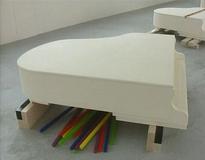 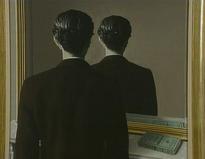 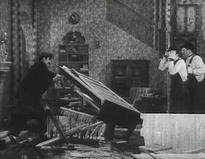