In this video Acconci let the public sphere smash against the private sphere in the form of a ritual performance wherein the artist alternated between exposing himself and censoring himself. We see the artist bent over a tape recorder. On it the voice of a man was audible – Acconci himself – who contracts a consent and exposes the intimate details of his life. His babble is very confused and fragmented, but it is nonetheless clear that it is about unresolved traumas and secrets. The numerous times that the taped voice seems just about to get to the heart of the matter – or a substantial something seems like it will be revealed – Acconci abruptly interrupts. Totally hysterically the voice on the tape screams-out “No, no, no, no, no... Don’t reveal this! No, no, no, no, no... Don’t tell this! No, no, no, no, no... Leave it out! No, no, no, no, no... Keep this for yourself!” Acconci has stated that this work was intended to “dig into the past” as he tries to ‘face the facts’, claiming, “I really want other people to find-out these secrets because they can establish a kind of image for me.” By preventing the viewer from hearing, of course, his ‘secrets’ remain only implicit. As the double entendre of the title implies, he both invites and avoids a direct confrontation with the viewer. 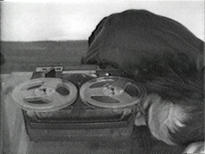