From her dozens of portraits, Manon de Boer chose two, ‘Robert, June 1996’ and ‘Laurien, March 1996’, which she would - and still does - portray over an over again: the same individuals, in the same position, and within the same visual frame. In 1996, she films a couple of her friends during moments of intense concentration: Laurien reading a book, Robert playing the guitar. These are moments when they seem to forget about the camera’s presence. For the audience, it is hard to tell what they are doing. There’s nothing but a face, on which you can read very little or even nothing at all. Five years later, in 2001, she films them again, busy once more with the very same occupations. The 2001 portraits, just as the previous series from 1996, are conceived as film installations. If shown next to each other, they acquire a whole new meaning. What was intended as a reflection on the difference between time and duration becomes also the testimony of the passage of time. More than ever, the spectator becomes aware of his perception of time. Is a portrait more than an uninhibited instance? What hides beneath the facial expression of those who are portrayed? Isn’t every image you have of the other a reflection of yourself?
Manon De Boer: "Laurien is portrayed in three sessions, as indicated by the title dates. Each time, Laurien is asked to read a newspaper, which is outside of the frame, and filmed on b&w film for the duration of one Super-8 reel of ± 2’30”." 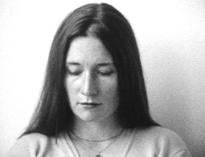