In Pursuit (1998) the camera moves rather fast in a narrow circular corridor. At regular intervals we notice a naked figure moving quickly and ducking down each time as the camera approaches. The camera keeps moving at the same speed, following the same circular centrifugal trajectory. Sometimes the figure turns up, approaching from the other direction, but because of the ducking, shy movement, he or she is impossible to identify. Camera and character seem to be engaged in an endless, nervous chase. The shyness and nervousness of the character is intensified by the rhythmic, mechanical sound of the film. 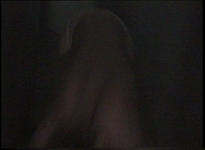