When Cécile Wagner invited Emilio López-Menchero to exhibit in Ath, Belgium, the artist proposed to realize a faceless giant called M. as any Mister or Modern person.

Recognized by the UNESCO, Ath is known as the City of Giants after the Ducasse festivities which take place every year on the fourth weekend in August. Huge figures representing Goliath, Samson, and other allegoric figures are paraded through the streets, and Goliath's wedding and his famous fight with David are re-enacted. The artist's aim was to introduce an anonymous figure and he designed it according to the style used by Ernst Neufert in his fundamental Bauentwurfslehre (Architects' data, 1936). The production was done by the Stéphane Deleurence atelier, a studio specialised in the shaping of the traditional giants.

M. el gigante is an ensemble of recordings of the giant walking around the city of Ath, its art space Le Palace and at the contemporary art fair Artbrussels 2007. 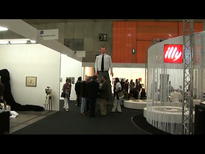 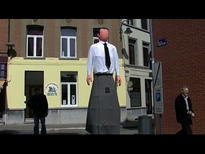 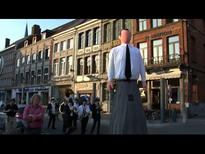