Between 1997 and 1998, Emilio López-Menchero lived in Berlin in the frame of an artist in residence grant at Künstlerhaus Bethanien.

In that period, Berlin was the biggest city under construction in the world: the goal was to be at the appointment with the year 2000 and to provide a new image of the city. Several famous neighbourhoods, like Potzdammerplatz and Friedrichstrasse, or symbolic monuments, as the Checkpoint Charlie and the Reichstag, were radically changing their shapes and looks.

Nevertheless, the most controversial project was the call for proposals for a Memorial of the Holocaust that should have been located in the former free zone next to the Brandebourg Gate. The main debate concerned the legitimacy of this large scale monument in a moment when the existing traces of the past, as museums and concentration camps, were decaying due to the budget restrictions.

To react to this grandeur, Emilio López-Menchero decided to build a portable and human scaled monument that consisted of two concrete shoe leathers of 18 centimetres. Winking at the Berlin Wall – because during four decades an issue of the berliners was to look above it - this object was yellow painted as provisory road signs and its height referred to the standard stairs step height.

Emilio López-Menchero repeatedly relocated the monument in different spots of the city and taped the reactions of the passers-by. The project was then completed by a series of drawings made in the schematic style of Ernst Neufert (1900 – 1986) - a German architect who is known as an assistant of Walter Gropius, as a teacher and member of various standardization organizations, and especially for his essential handbook Architects' data (1936)– that enumerated the infinite uses of López-Menchero's monument.

This long version of the video documents the Berliners reactions to the artist's intervention. 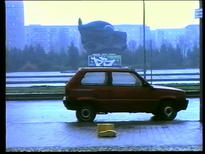 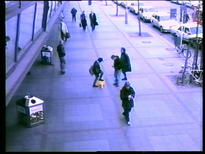 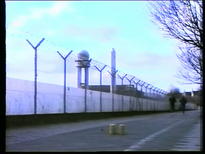