In many ways ’A Silly Dance’ is a little brother to ’Idiot’s Brew’ (2002). De Bemels sets out with the same images and culinary references, but this time - as with his first videos - he also aims the camera more at himself, exploring his own body, his acts and rhythms, shapes and colours. A mixture of analogous and electronic sounds (by Rob(u)nent) constitutes the starting point for a kinetic composition of visual stimuli, which mostly play with the fragmented images of elastic movements and stroboscope effects. "The sequel to "Idiot’s Brew" (2002). This time, the kneader and the dough become one..." (Antonin De Bemels). 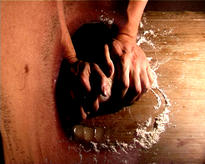