In 'Cantaert Hunter 8906020’, a figure is depicted running through a cornfield. This figure is split into three, as the work cuts between three films of the woman running while wearing different clothes and hairstyles. In the streams, the corn leaves brush harshly across her face, simultaneously caressing and hitting her. The facial expressions leave the viewer pondering this flight – where from, where to, and for which reasons? Are the women running in the same direction, or towards one another, or away from one another?

Pacquée: "Running through the cornfield I thought of escaping, fear, disappearing, losing myself, and shelter. Of different movies where people escape through the cornfield to reach freedom and illegal people hiding there. All of this came to mind when asked to create a new work for a group show in a small village, in Belgium. With the intention of photographing the village, I spent one week there. Seeing the crop fields over and over again, I felt an incredible desire to run through these fields and did so. First, without my camera, I played the of game hide and seek - on my own. To begin with I walked carefully. Walking faster, I started to run as if someone was following me, loosing myself completely. The next day I took my camera and filmed myself, running through the fields, the leaves cutting in my face - as if a punishment. Hearing only my own breathing and the sound of the leaves the feeling of being followed returned, and the emotions I was thinking in the beginning came to life." 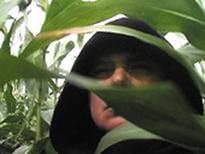 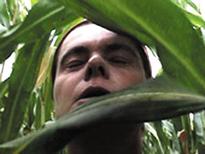