Blanket Apology focuses on strategies of communication that are used when public figures give public apologies. Like Speech Bubble (2008), Blanket Apology is a dialogue between a man and a woman. The man is attempting to offer an apology for his sexual perversion, unethical medical practices, theft, and hubris; while at the same time attempting to ’save face’ and maintain his position as a public figure. The woman is demanding an apology and an explanation; while at the same time being manipulated by the man’s linguistic and sociological tricks. Blanket Apology was inspired by the apologies from the catholic church for sex abuse in 2010, the admission of guilt by Pol Hauspie (of Lernout & Hauspie) for corporate fraud, and the recent apology by the US government for the ’Guatemalan Syphilis Experiment’. 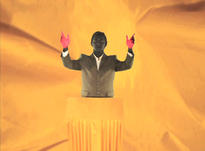 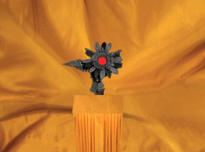 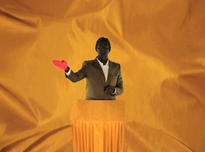