In 1996 Manon de Boer made a series of black-and-white portraits with Super 8 – her first time-based work. She filmed a couple of her friends during moments of intense concentration: Laurien reading a book, Robert playing guitar. These are moments when they forget, just for an instance, what is staring at them; they are unaware of the camera’s presence. As an audience it is impossible to make out what they are doing. There is nothing but a face, on which you can read very little or even nothing at all. The staring camera is both intimate and distant. The image is static, the frame is fixed, the recording is silent and uninterrupted – the portrait is fixed in time as if it were a photo. De Boer focuses on the relation between time, the concentration in the face appearing on-screen and the intensity of seeing. She wants the spectator to feel a difference between time and duration, to become aware of his perception. Is a portrait more than an uninhibited instance? What is hiding beneath the surface of the facial expression of those who are portrayed? Isn’t every image you have of the other a reflection of yourself?
"Laurien is portrayed in three sessions, as indicated by the title dates. Each time, Laurien is asked to read a newspaper, which is outside of the frame, and filmed on b&w film for the duration of one Super-8 reel of ± 2’30”." (Manon de Boer) 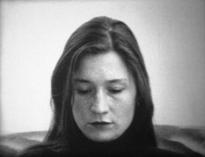 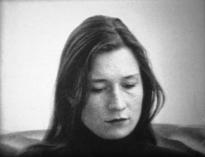