In ‘Theme Song’ Acconci most effectively plays-on the dynamic field of tension between ‘I’ and ‘you’, between the artist and the viewer. The artist lies on the ground in the living room, in front of the sofa. His face is filmed in close-up. From this position he creates his personal space from which he tries to relay a painful, truly perverted intimate relationship with the viewer. Acconci finds himself face-to-face with the viewer: his head almost bulges out of the screen (“My body is ready to spring out around you”). Speaking in a slightly uneasy, intimate tone, he plays leapfrog with different mental standpoints, thereby taking other positions toward the viewer. Sometimes vulnerable, sometimes manipulative, relaxed, he smokes a cigarette, puffing alluringly and then open heartedly while playing theme songs from The Doors, Van Morrison, Bob Dylan and others, on the cassette player. These songs form the starting point for Acconci’s monologues, which regularly mix and entwine with the songlines. While Acconci’s other monologues are often about women, the ‘you’ in ‘Theme Song’ is without gender, non-specific and universal (“You could be anybody out there”). In an ironic mix of knowledge and influence, Acconci finally admits that also in this video the idea of communicating face-to-face is a pathetic illusion (“I can feel your body right next to me... I know I’m only kidding myself... You’re not here”). 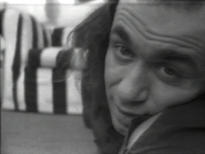