The first ’Silent Letter’ was written on April 24th, 2008. Officials are obstrucing passing people: they are not allowed to walk across a public square. However, an introductory note by the artist is dated 2007. Crucial themes of the series are introduced here: the artist herself writes these letters, giving an impression of what she sees, and loosely commenting on the images, without wanting to offer any “explanation”. Through a poetic play on understanding and not understanding the filmed images, she focusses on her own subjectivity and that of the viewer. The invisible border is a second main theme. In this first ’Silent Letter’, people are not allowed to cross a square. Beneath the square a concert is being performed, and therefore the square itself has to remain silent. The artist does not clearly explain this, but she refers to it in the inter- and subtitles. This refers to a third main theme in these series: things being kept secret. 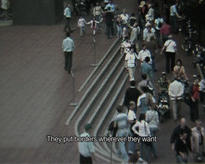