In 2003, López-Menchero was invited by the curator Madeleine Santandréa to show a new work in the Galerie –1 at CIVA, in Brussels. In this context, the artist showed a series of drawing called Tussen tussen ou l’entre-deux that employed the Indian ink technique. Each drawing of the series presented a slightly difference from the previous one and inserted additional elements - such as their clothes and postures - in order to transform known popular characters as, among others, Picasso, Marx, Che Guevara, the artist himself, the Michelin Man, Balzac, in a kind of continuous flow of mutations.
Among them we could recognize some of the characters that López-Menchero will be later embody in his Trying to be … series, but also a sumo wrestler. This figure is the starting point of the video work Ego Sumo Version 1 (2003) which was also presented in the same exhibition. Here the artist is seen as a Japanese Sumo wrestler, trying to fight his own image in the mirror. The video is an edit of different takes and a rough aesthetics marks out the work. The performance caricatures almost reaches the paroxysm in the impersonation of a figure who generally belongs to the collective memory, but it also questions the limit between amateurism and excellence in art. 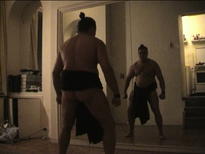 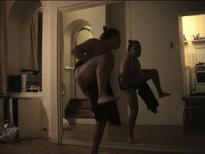 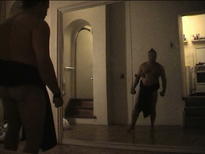