In ’L’Atelier (extrait)’, Mira Sanders brings together a set of imaginary figures personifying an audience in a scale model of a theatre space as if it were a micro-society. This is the first work in which Mira Sanders introduced human figures. ’The Painter’s Studio’ (1855) by Gustave Courbet functioned as a starting point, but whereas Courbet considered his painting to be a manifesto, Sanders insists on the anecdotical character of the mise-en-scène and the figures present in it. The figures can be highly recognisable – we see a king, a beggar, a baker – or abstract, moving themselves into an imaginary space. The installation was shown during the exhibition of the Prijs voor de Jonge Belgische Schilderkunst – Prix de la Jeune Peinture Belge 2007, held in Bozar, Brussels. The staging of ’L’atelier’ was reminiscent of how the people in Courbet’s version can be identified as the audience, the artist and his model, and the art world. However, Mira Sanders’s makes the artist and his model disappear and she projects a set of ’tableaux’ onto the wall: conversations or commentaries, referring to the architectural, institutional and acoustic context of the building of Bozar (also known as the Palais des Beaux-Arts – Paleis voor Schone Kunsten). Seen as such, the space occupied by the audience becomes a stage itself. 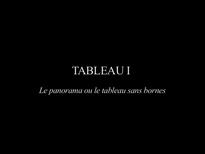 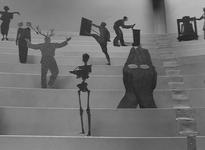 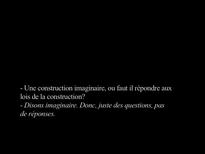