The artist finds himself in a narrow room – a space like a television screen – on one side of a long table. He is sitting on a chair. The viewer finds himself, at the other end, as it were, opposite the artist. Acconci begins a long, ambivalent and compelling monologue. He thereby hides his arms and hands underneath the table, rubbing them against his thighs. In the first instance the artist says that he wants to believe there is a woman under the table stroking his thighs and knees, while he touches her hair, shoulders and face. Thereupon follows a sequence in which the artist looks directly at the viewer and speaks. He asks him/her to take the seat facing him, to listen to him and to believe what he says. He considers it necessary to realise his dependency on the viewer. Then he once again brings his arms and hands under the table, this time suggesting that he does not want to believe that someone is under the table and that it is he himself who is stroking and caressing his thighs, knees and forearms.
In this now notorious video – a work illustrative of Acconci’s early, quarrelsome performance style – the artist expropriates a sexual fantasy in order to (once again) reflect upon the relationship between the camera, the viewer and himself. The artist passes-on the activity of looking, implying a signed contract between viewer and performer – himself - consciously giving it a sexual charge. The witness is not only a voyeur, but also an accomplice. He/she is the one who makes the performance possible by contemplating the scene, by believing in the intensified fantasy. The table, in which there is a clear reflection of the artist, can thereby be seen as a metaphor for television, for the screen. ‘Undertone’ also calls up the power play that can possibly be unearthed by being confessed. Additionally, slumbering in the work is also the echo of perversions that exist in the education system in which everything that happens under the table is not considered acceptable. 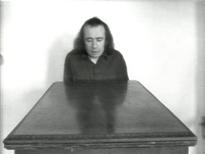