A IS HOTTER THAN B

A is hotter than B is a video showing the dissolution of a drop of ink captured in an ice-cube which disintegrates between the artist’s fingers. While the rigorous title assumes the status of a mathematical formula, it contrasts with the majesty of the ample, harmonious movement of the colored liquid. The arabesque lines are a function of water temperature: when it’s cold, ink spreads sluggishly, maintaining a compact form, but as the water warms up, ink diffuses more rapidly. As our gaze follows the turns and twirls of the spiraling forms that appear to be the simplest expression of chiaroscuro, the shape attains its denouement in its dissolution. Astonished by so much beauty, our eye loses itself among the details of the sensuous curves, while our attention subsides as if distracted and magnetized by the majesty of the movement. Obeying a dynamic embodied in turns by laboratory practices of evasion and observation, the work thrives on the attentive gaze directed toward the physical world. The climax lies on the side of the Stimmung—a German concept studied by numerous disciplines (philosophy, esthetics, literature), which could be summed up as an expression of harmonious unity and a sensation of plenitude experienced in front of a landscape, so potent as to engender a desire to be absorbed in that landscape, to become the landscape. (Cécilia Bezzan) (source: https://collection.fraclorraine.org) 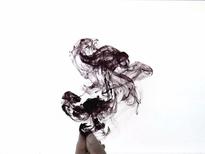 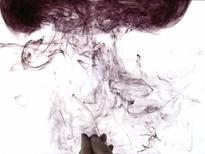 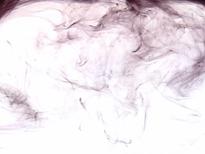