SAHARA CHRONICLE : A COLLECTION OF VIDEOS ON MOBILITY AND THE POLITICS OF CONTAINMENT IN THE SAHARA

A collection of videos on mobility and the politics of containment in the Sahara. A video collection containing an undefined number of short videos documenting the current sub-Saharan exodus towards Europe, ’Sahara Chronicle’ examines the politics of mobility and containment which lie at the heart of current global geopolitics, and takes a close look at the modalities and logistics of the migration system in the Sahara. Unlike the networks facilitated by lasting material infrastructures such as rails or fiberglass, the trans-Saharan migration network is a vibrant process of spatialisation performed by the psychological dynamics of anxiety, fantasy and desire, a web formed of obstinacy and vulnerability. The material was gathered during three fieldtrips to major gates and nodes of the trans-Saharan migration network in Morocco, Niger, and Mauritania. In the loose interconnectedness and widespread geography of these locations, ’Sahara Chronicle’ mirrors the migration network itself. It includes documents on Agadez in Niger, capital of the Tuareg and gate to the Saharan basin for the main migration routes coming from West Africa; Nouadhibou, the northern port of Mauritania located on the border to the Polisario Front / Western Sahara from which migrants leave on boats to the Canary Islands; Oujda on the Algerian border where desert-crossers enter Morocco; and Laayoune in the Western Sahara, departure point for boats leaving for Spain. ’Sahara Chronicle’ has no intention of constructing a homogenous, overarching, contemporary narrative of a phenomenon that has deep roots in colonial Africa, and is extremely diverse and fragile in its present social organisation and human experience. No authorial voice or any other narrative device is used to tie these disparate videos together; the meaning is produced by the viewer who has to extract it from the interstices between the videos, i.e. from the connecting lines between the nodes where migratory intensity is bundled, which is the stretch most invisible to the eye. Dispersing the viewpoint acknowledges at the same time the multiple and cooperative process of knowledge produced on the way. ’Sahara Chronicle’ is part of ’The Maghreb Connection’. It is an expansion of the ’Agadez Chronicle’ which consists of the first 4 videos relating to the migration hub Agadez in Niger, and was produced for the exhibitions of ’The Maghreb Connection’ in Cairo and Geneva 2005/2006. The full version of ’Sahara Chronicle’ was first exhibited at Arnolfini, Bristol in the context of ’Port City’ in September 2007. (Source: https://www.geobodies.org) 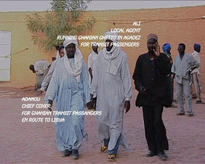 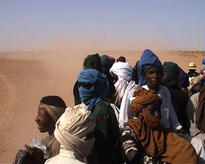 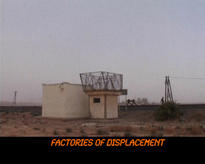 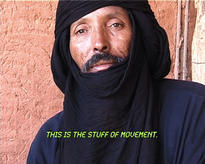 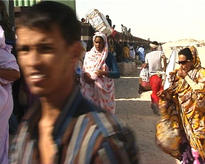 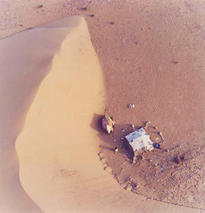