On the face of it Adieu Tristesse is a black comedy which takes as its subject the act of ’sawing-the-lady-in-half’. We are comforted by our familiarity with this illusion and are sure all will be well in the end. Meanwhile the piece operates on another symbolic level in so far as it alludes to trick effects employed in early cinematography to heighten suspense and theatricality. Finally, there is a ‘third meaning’, an obtuse meaning characterised by gesture and accent, sometimes comic, sometimes pitiful which exists beyond the narrative and is a signature in much of Robert Cash’s work. 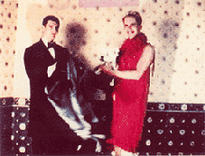