A major component in the work of Emilio López-Menchero is the fact that he takes the identity of icons. This does not really mean he imitates them, but rather that he genuinely tries to become this person or icon. Torero / Torpedo (2004-2007) is a series of recordings and photographs of different performances by López-Menchero.
The idea comes from the famous oeuvre by Picasso called Bull’s Head (1943) which represents the head of the animal thanks to a bicycle saddle and handlebars. According to López-Menchero, Picasso produced an hybrid, a mix of Eddy Merckx and the Spanish bullfighter Manuel Laureano Rodríguez Sánchez (1917 – 1947) - better known as Manolete – and this reminds to López-Menchero his status of being a Belgian citizen with Spanish roots.
The artist, dressed like a torero, hangs around with or drives a so-called torpedo-bicycle (a bike with a back-pedalling brake, so without handbrakes). The handlebars were replaced by a couple of great bull horns while he placed a tape player on the roof rack of the bicycle that loudly played the best known paso-dobles scores.
This series includes performances in S.M.A.K. (Ghent, 2004), Adinkerke (2004) MARTa (Herford, 2005), FIAC (Paris, 2005), Kunst Nu (Amsterdam, 2006), Theater aan het Vrijthof (Maastricht, 2007) and in the Col d’Aubisque (2007). 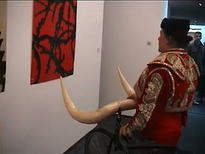 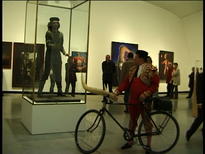 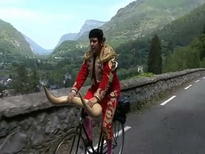