Made in Belgium has a double nature. It’s a work in itself but it’s also a silent preview for a film that doesn’t yet exist and may never exist. That’s why the protagonist, played by Laurent Flamand, is but a torch-bearer of another hidden story. Meessen and Flamand explore the potential of geographic territories that allow us to define ourselves beyond the framework of nationality. Belgium, a small village in Wisconsin, becomes an adopted territory from which to begin this investigation. The film presents a loose interpretation of the trailer for Made in the USA, a film by Jean-Luc Godard, which was produced in France. Meessen hereby declares his brief homecoming after 35 years of life in Belgium. 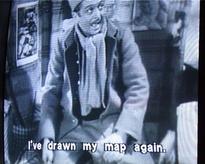