Using the principle of collage and multiple screens, Van Kerckhoven creates a computer animation with several layers of meaning. She has her own free associations around the words "death", "judgement", "hell" and "heavenly glory". Flashing animated images of dogs, a dancing man, devilish faces, dead bodies, etc. come straight to the viewer, who has the freedom to make his own associations between them.

"A film built according to the logic of the Spiritual Exercises of Ignatius of Loyola, founder of the Jezuit Order. Death, the Ordeal, Hell and Devine Glory are the four extremities of the Jezuits. Those are the phases one has to go through to attend a state of mercy wherein sin, Evil, can be restrained. I figured out my own extremities whereby I conclude, through banality and repetition, sacrifice and devotion, that Evil exists by the grace of Good, and vice versa." (AMVK) 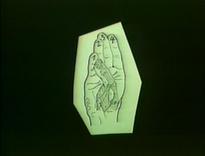 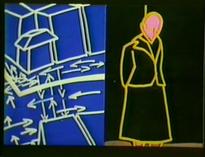 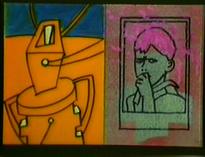 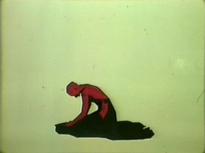